The Operations layout is defined by the External API type you choosen in the Interface tab. We'll explain the available options for each type in this section. 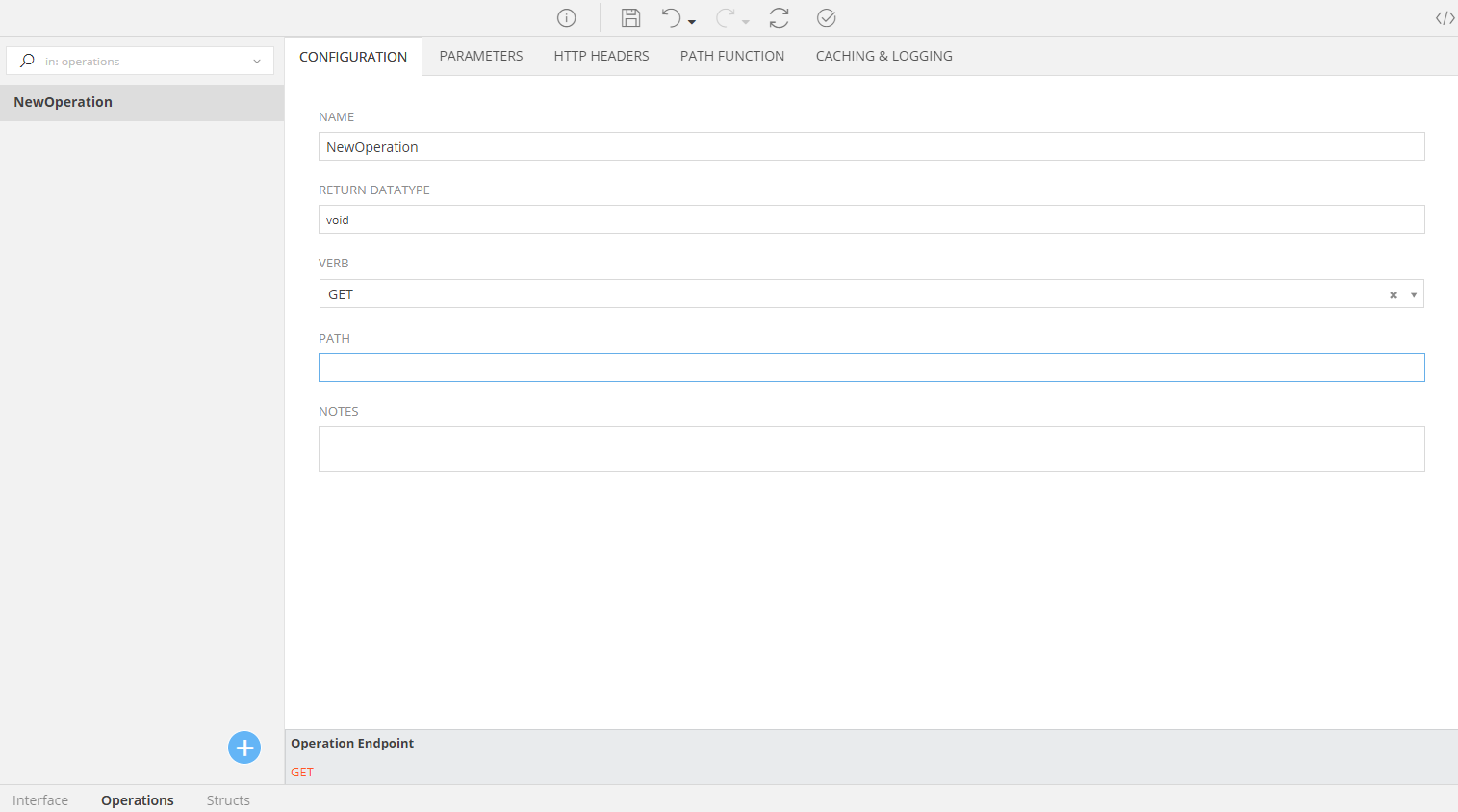 Here you set the most basic properties for the API endpoint you want to integrate:

In this tab you can define any parameters needed by your Operations. To Add one or more Parameters (when and where needed), simply

and since its GET Operation requires the user to pass the "Capital", so as to search for the Country, the Operation's Parameter would be

You can define as many parameters you need to successfully call a REST Service, with any types you require (e.g. primitives for QueryParameters, entire Objects or Collections for RequestBodies etc).

The following example shows a POST Operation that adds a new Currency to a Country (note: it does not exist in the REST Service mentioned before. It is a fake URI created solely for this example!). It expects a string as the Country that will receive a new Currency, as well as a currency Object, obtained by the REST Service itself and defined (automatically) as its struct.

In case HTTP Headers are required by the API operation, they can be added in the Headers tab. To add a header, simply

Header Value must be proper Mamba code. If you want to assign a hardcoded string value, "myValue" must be typed. Typing just myValue (without double quotes) will result in a validation error.

By default, the Operation Endpoint url is autogenerated based on the Path defined in the Configuration tab and on the Parameters that are defined as UriPart or Query Parameter.

There are cases where you may want to have full control over the Endpoint Path. To do this, check the User Defined check box. A code editor appears where you may write a Mamba function that must return a string, using the operation parameters as input arguments. This string will be used as the operation end point path. 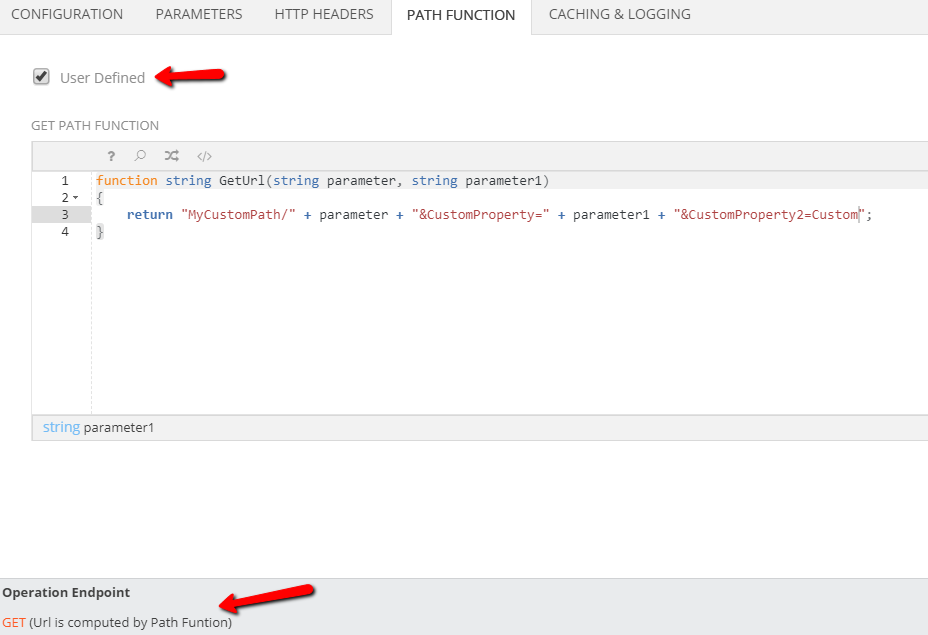 If enabled, this option uses a Cache (either an internal, or an external, if defined, such as a Redis Server) that will hold your External API's responses, so that if a response is cached, it will be instantaneously retrieved from the Cache, this eliminating the need to issue another API call.

There are a few Options that can be defined per API Call Operation, namely:

If enabled, the execution of the API Operation will be logged, keeping information such asa

As soon as you define your REST API Endpoint and refresh the Model, zAppDev will execute the underlying operations, collect their structs (in terms of input parameters and/or result types) and populate the Struct Tab with the detected classes and their relationships.

For example, the Countries API described before will detect the following structs, starting with the Root, that is the parent of all other structs: 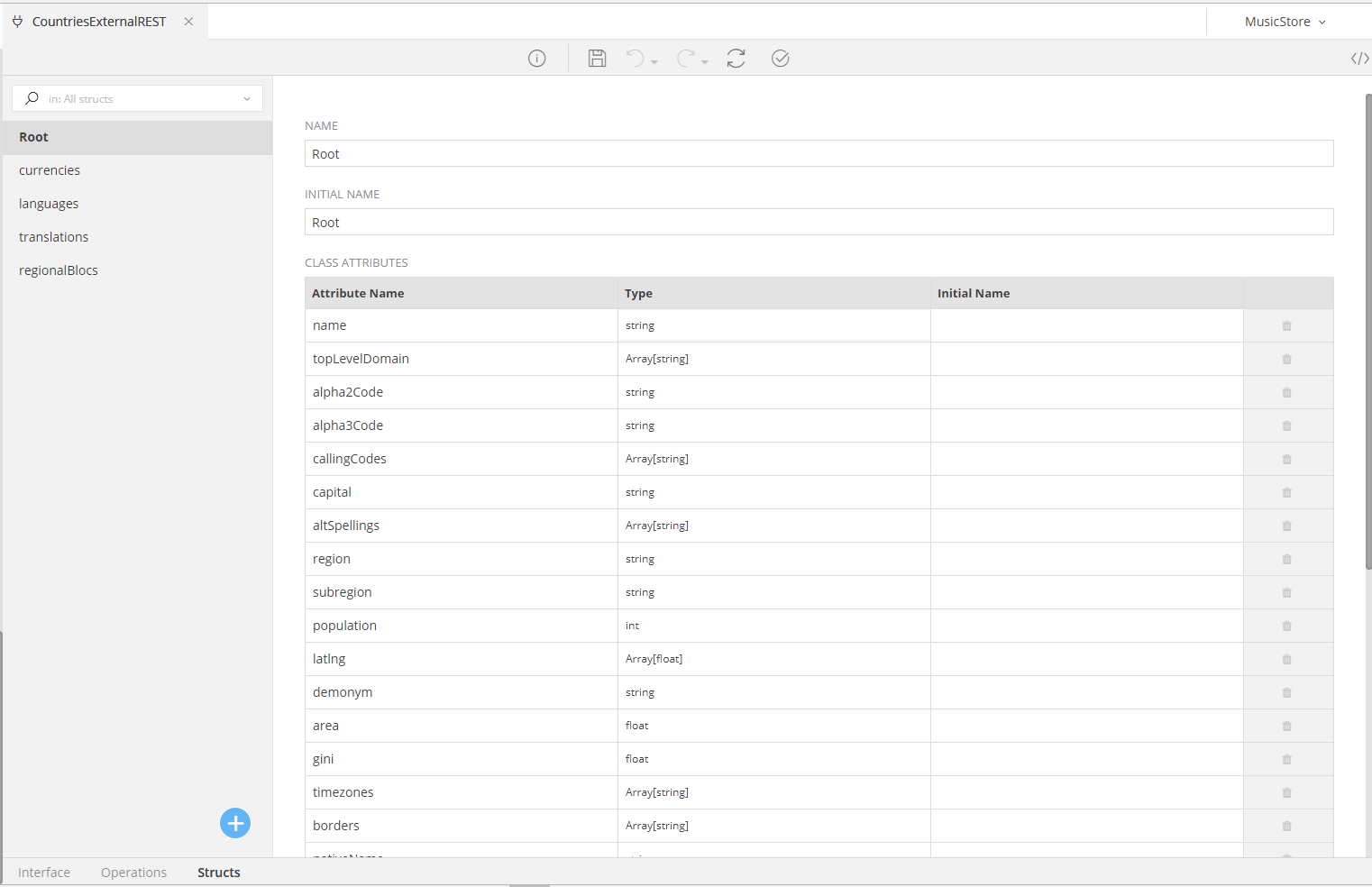 Additionally, since (in this example) the Root (top most) struct is related to other structs, such as currencies, languages, translations and regionalBlocs, its Relationships will also be automatically populated, giving a result similar to the following: 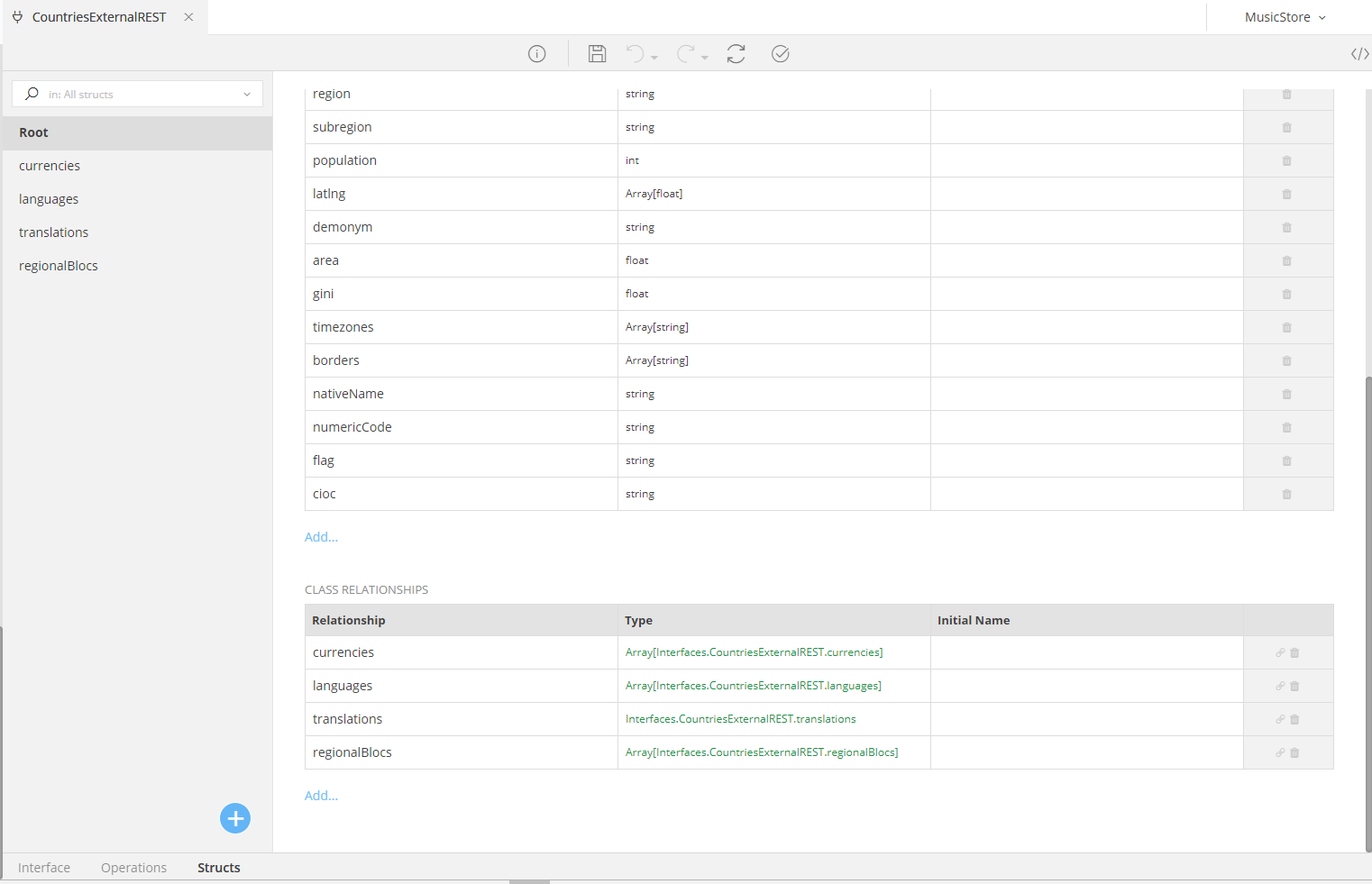 Every Struct has the same configuration items:

The Operations of a SOAP Service are automatically created with all of their underlying settings, as soon as you select your SOAP Source and hit refresh. Contrary to the REST Services described earlier, a SOAP Service cannot be altered in terms of Operations and/or Parameters, since they are created following the instructions of the WSDL structure. You can, however, define their Caching & Logging settings, just as described in the REST Services documentation

Here you set the most basic properties for the API endpoint you want to integrate:

You will see that the Properties described are editable. However, we would advice you against changing them, unless you really-really know what you are doing and why. The best practice would be to leave them follow the structure of the WSDL fetched by your SOAP service.

This tab presents the parameters used by each of the SOAP Service Operations. You can add and delete them, however since they have been prepopulated by the SOAP Service's definition, make sure you know what you are doing and, more importantly "why", before you change them.

The Caching and Logging options for the SOAP Services are same with the ones described during the REST API. For more information, read this

As soon as you define your SOAP Endpoint and refresh the Model, zAppDev will download the WSDL file, parse its definition, collect its structs (in terms of input parameters and/or result types) and populate the Struct Tab with the detected classes and their relationships.

From then on, you will be able to configure and use them following the same logic described here

Library type APIs are the way to extend zAppDev's functionality using existing libraries. To define a Library API you only have to upload the related binary file(s) and set the API class full path.

It is important that Api Class Full Path, matches the namespace defined in the binary file. 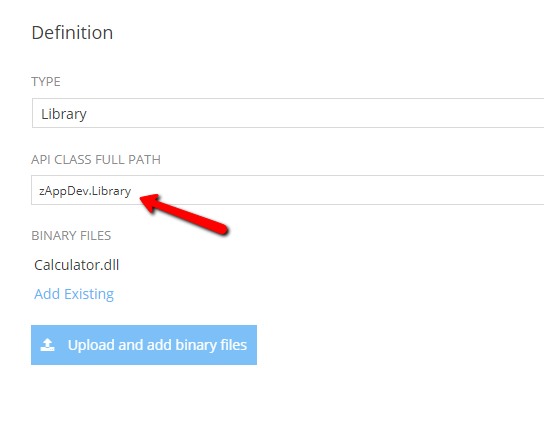 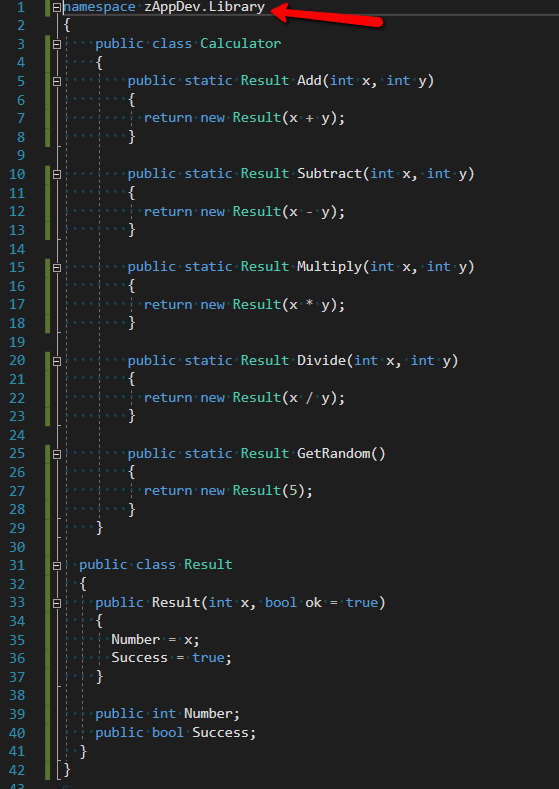 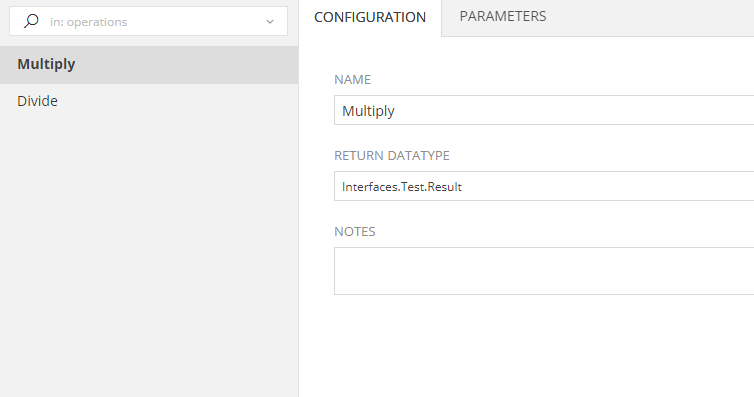 As with any other Service, here you set the most basic properties for your API Endpoint:

In this tab you must define the parameters in order to ** exactly match the signature** of the Library method, in terms of name and DataType. To Add one or more Parameters (when and where needed), simply

To import structs, click the Refresh button on the Ribbon. zAppDev will autodetect the classes defined in the Library and populate the Struct Tab with the ones user has selected. 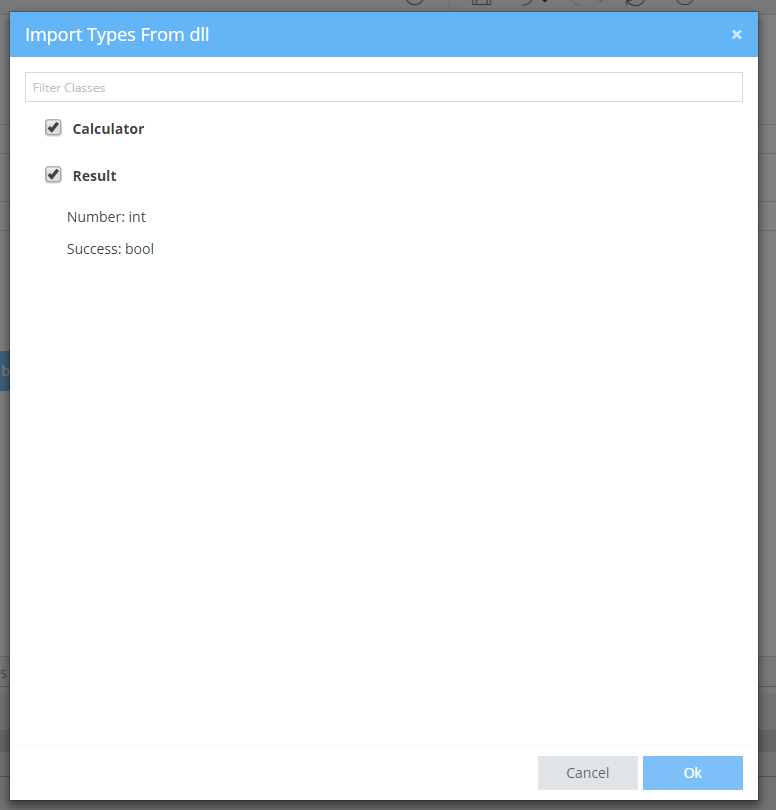 From then on, you will be able to configure and use them following the same logic described here

zAppDev is able to handle data stored in xml documents via XSD APIs. You may define an XSD type API by uploading a single XSD file or a zip containing multiple XSD files. 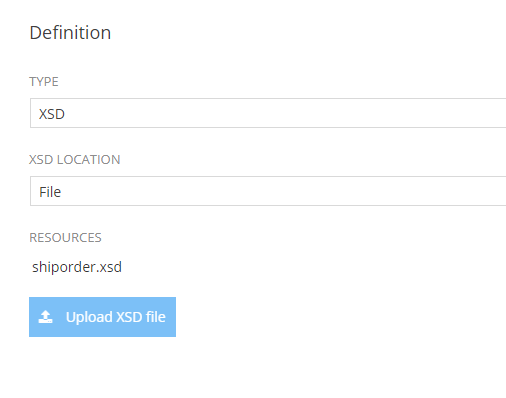 The Operations of an XSD API are automatically created with all of their underlying settings, as soon as you fill-in the Configuration tab and hit refresh and cannot be altered. For each struct defined in the XSD, a Parse and a Serialize method is created.

Parse method can be used to parse xml string content into the corresponding struct.

Serialize method can be used to serialize a struct into xml. 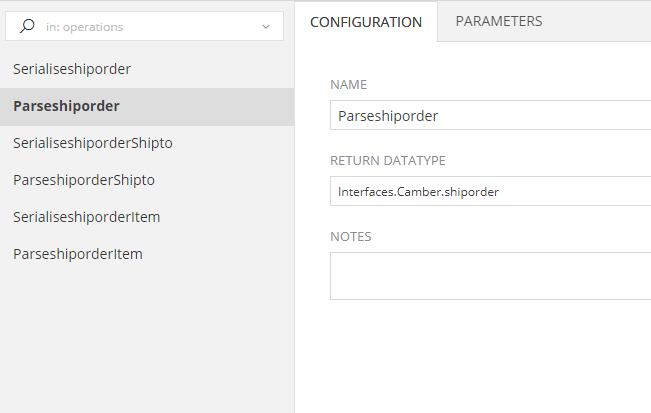 In the Parameters tab you may review the parameters of the above mentioned methods. You are allowed to alter them, but again this will be usefull in extremely rare cases.

The Structs Tab is autopopulated with the classes and relationships defined in the XSD file(s). They cannot be altered except from defining Initial Names for special cases that have been mentioned before.

As with any other Service, here you set the most basic properties for your API Endpoint:

In the Query Tab you can define the select query that your Operation should execute.

The Query must always return a resultset (i.e. SELECT). Other queries that do not return anything (e.g. DELETE) should not be written there

As soon as you define your SQL Query, zAppDev will run it and populate its Parameters and Structs

If the SQL Query ran in your Operation contains parameters, they will be automatically defined in this tab. You can alter, add and remove them if you wish; remember, however, to update your Query as well, so that the SQL Query and the Parameters defined are aligned.

Example: Operation with no Parameters¶

The image that follows shows an Exposed API Operation that consists of a Query expecting two parameters:

The two parameters will be added to the Parameters tab, allowing you to define their expected Datatype, Default Value and Notes

Make sure that the parameters inside your Query (marked with an @) and the ones you see in the Parameters Tab are the same, in terms of their variable names. For example, the @user parameters used in the Query must be the same in the list of the Parameters. Should you rename them in one place, propagate that change in the other as well.

As soon as you define the SQL Query to be ran on any Operation, zAppDev will run it, detect its result and populate the Structs Tab following the resultset it got. For example, the GetOrders SQL Query shown before, will have a Struct looking like this:

If you rename a Struct, remember to reset the Return DataType of any Operation that uses that Struct