It is impossible to build a high-quality Application without defining any execution logic. For this, zAppDev uses Mamba: a powerful, yet extremely simple, C-like, Object Oriented Programming Language created exclusively for zAppDev. 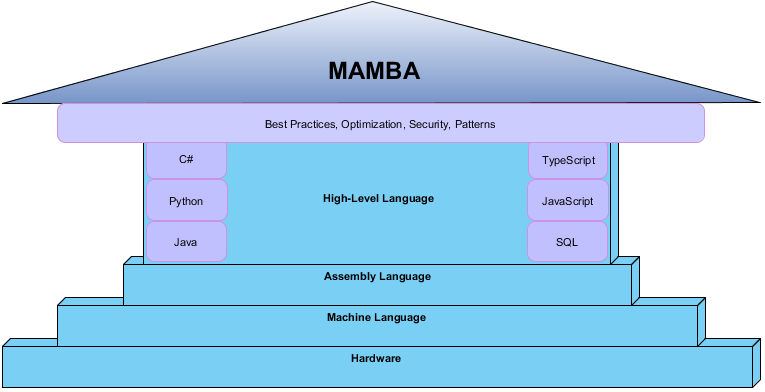 More specifically, Mamba is a programming-language residing higher than the high-level programming languages, that provides an abstraction level to the latter in order to:

Mamba can be described as a transpiled programming-language that the language-agnostic zAppDev uses to transpile it to the target language selected via the Implementation Strategy Settings.

Think of it as a vocabulary and a set of grammatical rules, looking a lot like the C Programming Language, that, together with a comprehensive set of commands and libraries, are finally generated into another programming language using the most optimal and efficient decisions, rules and patterns.

The following table shows you just a few of the questions and decisions we programmers stumble upon all the time and the way that Mamba addresses them, requiring almost no action or lines of code:

Of course, aside from making the best decisions for us, Mamba also helps write the minimum lines of code required for a task. All known and commonly used tasks (e.g. Authentication, Persistence, Data Transformations, Events, Caching and so on and so forth) that usually require tens - and sometimes hundreds or thousands - lines of code (depending on the Programming Language and Framework used), have been pushed into one Mamba command thanks to its comprehensive Libraries.

Just imagine what would you need to do if you wanted to create a plain Form Authentication for your Application, using cookies, an Identity Server and some AES encryption. Only in ASP.Net this task would require hundreds of lines of code, endless checks, exception handlings, redirection logics etc. In Mamba, all that is hidden - compressed into simple commands; you type a command, zAppDev transpiles it to those hundreds lines of code we mentioned earlier.

The previous example shows exactly what Mamba does: hides all implementation logic behind a few maintainable lines of code. And here, I did not use the word "maintainable" by mistake. 'Cause it's scary out there. Programming life is not as books and trainings describe it. Be sure that no matter how organized your team is, no matter how "set in stone" the requirements are, no matter how approved and signed the designs are, your code will change. At the worst possible moment. Days before you have to wrap up and deliver your Forms-Authenticated Application, your boss will come smiling and say he/she wants a Windows Authentication in place. Or throw you something like "great job on the caching! It really sped up the app! You know, I was out with my friends yesterday and they said something about Redis...". Or the even better "hey, heard about that GDPR thing? Looks like we'll have to redefine a few things".

In any other language, the scenarios described would end with you in an ICU (or your boss, depending on your temper). Mamba, however, changes it. Whatever your choice of generated language (C# or Java), whatever your choice of frameworks and technologies (Identity Authentication or Google Authentication, internal Cache or an external Redis Server, SQL or Mongo DB), your code will remain the same.

As far as the Platforms and Technologies used are concerned, Mamba depends solely on the Implementation Strategy selected in zAppDev. In other words, your Mamba Code, together with your designed Models and the Configuration you apply in zAppDev, will be generated into a a web-application for and with the frameworks and technologies of your choice with all the additional items that may be required.

For example, the MVC (Model-View-Controller) Implementation Strategy will generate you: